Despite the fact that the Oregon Department of Forestry offered a public showing of a proposed timber clearcut on public land along Highway 101 near Hug Point, they canceled the showing when it was clear that a concerned public would actually show up. This cancelation didn’t stop the public from attending, however. The Hug Point parking lot was a crowded scene today for a meeting of sixty-five people from communities from Astoria to Oceanside and points in between. Attendees had initially come together to communicate their concerns to the ODF about the proposed 77 acre clear cut known as Norriston Heights between Hug point and Arcadia Beaches. Unfortunately, ODF cancelled what was to be a tour of the area, and the event became an idea-sharing session about how to protect our vulnerable watersheds from damaging clearcuts and aerial pesticide spraying. 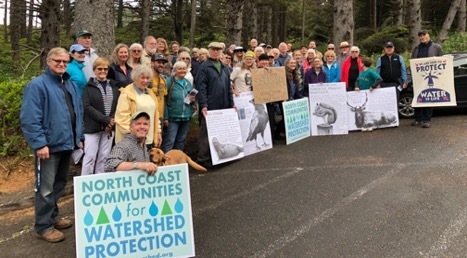 Several homeowners whose water systems lie in the proposed clearcut area were in attendance, and stated that they had not been informed about the proposed logging operation in their watershed, nor notified about the tour.

Representatives from several local organizations involved in educating the public about ecological issues and protecting the environment participated, joining local homeowners and private citizens. A letter from the Ecola Creek Awareness Project was read, clearly stating significant concerns about the proposed project. Discussion about the possibility of stopping this clearcut followed. This proposed project would

Actions discussed to oppose this proposed clearcut included letter writing campaigns, attendance at local and state regulatory agencies’ meetings, spreading the word to those who remain unaware of the harmful effects of clear-cutting and aerial pesticide spraying, the necessity to keep old growth trees alive to sequester carbon, and the plan to unite along Oregon’s North Coast to work toward truly healthy and sustainable forestlands. 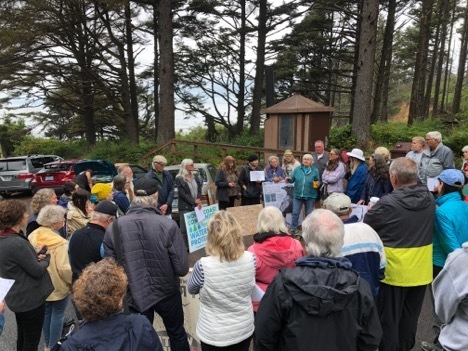 Sixty five people showed up today to demonstrate the depth of our concern about this project. Unfortunately, the Oregon Department Of Forestry did not show up to hear our concerns or answer our many questions about this timberproject.